As the world's greatest sporting event descends on the capital later this month with all its attendant hype, excitement and drama, Flower Market Florists will be hard at work across London, dressing hotels, restaurants and event venues with the very best of British event floristry.

Logistics is emerging as a key issue for London florists during the Olympic period. Some have decided to work through the night to stage and clear functions at high profile venues, whilst others are simply building longer delivery times into their schedules.

Florists with Olympic site contracts have been told to allow 4 hours for security checks and access to the venues for every delivery!

And then there is the Jane Packer Flowers team. They will be frantically creating 4400 Victory Bouquets to be presented to athletes with their medals on podiums at Olympic venues across the country. 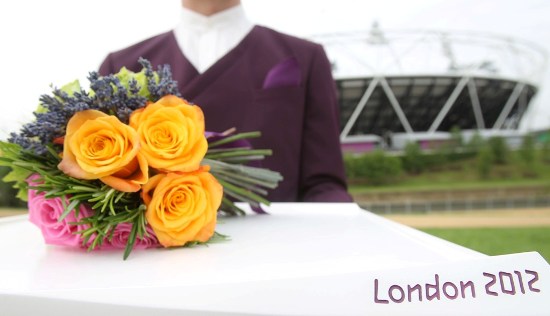 The project is a colossal logistical undertaking for Jane Packer Flowers, involving the re-introduction of cut rose growing to the South of England in partnership with Landgard UK and Chessum Roses; direct trading with growers; back-up supplies through New Covent Garden Flower Market; and the willing and able hand-tying skills of the floristry students of Writtle College, Bexley College and Kingston Marwaud.

We wish the team every possible success.

So, exactly how do London’s florists plan to keep the city blooming this summer?

Mark Welford of Bloomsbury Flowers has found an invaluable source of clear, well presented road travel advice in getaheadofthegames.com. "We have 9 prestigious hotel contracts in the West End to look after, so it is essential for us to know how to get around", explains Mark.

"The workshops we attended a few months ago clearly explained that whilst journey times will be longer, London, contrary to popular belief, is simply not going to grind to a halt," says Mark.

"Some traffic lanes will be allocated as the Olympic Road Network to ensure athletes and organisers can travel around London. This will mean increased traffic, but not the road closures people seem to fear. We will be allowing for increased travel time, but there is simply no need for us to turn into nocturnal florists for the Olympics!"

Mark recommends that all florists check out the weblink to see how the Olympics might affect their businesses: http://www.getaheadofthegames.com/travel-advice-for-business/support-adv...

Your Flower Market is set to remain open and accessible throughout the summer as usual.

No lane restrictions are planned on Nine Elms Lane other than during the tennis events (28 July – 5 August), when there may be increased road traffic, but the Flower Market will be open as usual.

Please be aware that some wholesalers are opting for different opening hours to usual during the Olympic period (some opening and then closing earlier) to best suit their businesses and customers. Be sure to check timings with your preferred wholesalers to avoid disappointment.

Best wishes to all Flower Market Florists for a successful, free-flowing and world-beating summer in London.